This past week we have had some practices for the Extraordinary Ministers of Holy Communion, the Lectors, the Hospitality Ministers, the Sacristans and the Altar Servers for the new configuration of our church for the way we will celebrate the Mass. I am sure that many of you have heard about it by now that we are moving the altar back to the sanctuary. There are many reasons for this, which I will lay out in this letter.

When St. Paul speaks about the Lord Jesus and the Church, he tells us that Christ is the head of His body the Church. St. Paul tells us this in Colossians 1:18, he describes it in 1 Corinthians 12 and in Romans 12 just to name a few. We say in the Church, Lex Orandi, Lex Credendi, that is, We pray as we believe. This includes not just the things that we say in the Mass, or sing, but also the way in which we pray. With this configuration, the priest, who celebrates the Mass in Persona Christi, in the person of Christ, will be at the head of the Liturgical Celebration of the Mass. This is not to say that the priest is Jesus, but that the priest, when he celebrates the Mass or any of the other Sacraments, represents or stands in the place of Christ.

Ultimately it is for this same reason that the tabernacle, which holds the precious body and blood of the Lord, will also be taking its place at the head of the church instead of in the adoration chapel. This will also mean that we should show the proper reverence for the Lord Jesus when we walk into the church, both with our voices and with our bodies. We should genuflect towards Jesus in the tabernacle especially when we enter the church and when we leave the church, recognizing God’s presence among us. If we have issues with our knees, then we should make a profound bow towards the tabernacle when we enter and when we leave. 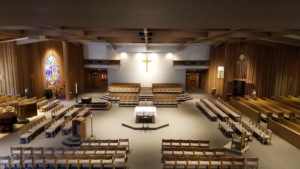 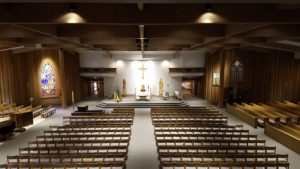 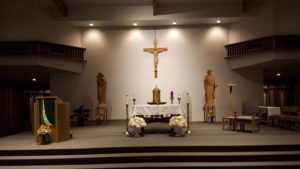 As we move the altar back into the sanctuary, it will also give me a greater ability to learn the faces of all of you – the people I am called to shepherd here at St. Brendan. As I have told you, I have a difficult time with names, and being able to see all of your faces during Mass will be an additional help for me. As I get to know you all, it will also help me to recognize from the front when someone has not been around for a while. Obviously people go on vacations and are then going to Mass in places near where they are vacationing and so are not at St. Brendan. However, this will help me, after taking the time to get to know your faces and then names, to know when someone is away for a while and we may need to check in on them.

This new configuration will also help me with preaching. It is tough to be preaching with your back to people when one is at the ambo preaching and tough for me to be turning in circles in the times where I am not preaching at the ambo.

As we place the altar back in the sanctuary at the head of the community again, it also takes away from us being turned in ourselves (a big problem in our society at large today) and reorients us toward the Lord. I am sure that most people were focused on the altar during the Mass, but this will provide for fewer distractions as we can get distracted by watching each other.

I do understand that this is a big change. When I first arrived, I did see a past survey in Fr. Jim’s office that showed that almost 60 percent of the people in the parish desired the change of the altar, having it return to the front. I have also encountered countless people since I have arrived who have come up to me and said that they wished I would change the position of the altar. I am not however changing it just because many people have expressed to me that desire, I am changing it for the many reasons that I listed above.

We will be working on helping people acclimate to this over the next number of weeks. There will be a second round of training sessions in the coming weeks, and we will continue them for as long as we need to. The altar will be moved after this weekend. If you have further questions I will be happy to answer them.

In the peace of Christ,

I have had lots of questions about this so I figured I would write a letter letting you know a little bit about me as I come in here to St. Brendan. I want to again thank everyone for your warm welcome in the first few weeks that I have been here. I am happy to be here at St. Brendan and am looking forward to getting to know you. I have a difficult time with names of people in general so I am also thankful for your patience with that. Some people have that gift of being able to remember names immediately, Archbishop Sartain for example, but I am not one of those people with that gift.

I grew up in Centralia, WA, just two hours south of here. It is a small town we affectionately refer to as river city because it floods so often. I have four sisters and am the only boy, number two in the pecking order. My parents live in Centralia again now. When I went away to college they moved for a while out to what used to be my grandparents farm. As a boy I spent my summers on that farm working, a time I thoroughly enjoyed.

When I was 18 I left the Catholic Church for several years for all the wrong reasons. My friends all went to different denominations of churches and I wanted to be where my friends were. I eventually drifted away from a place of faith entirely, or at least attending any church. Before any of your kids may attempt to use this as an excuse for not going to church, let me say that I wish I had never left. I was self-centered and immature about things and did a number of things in those years that reflected that self-centeredness and immaturity, many of which I wish I could undo today.

College was filled with a lot of fun and a lot of years! Most of it was spent finding myself, but I ultimately graduated from Eastern Washington University with a Bachelor’s degree in Psychology. During my college years I dated a woman very seriously and we were close to being married, she even had a date picked out, but I wasn’t ready so I ended the relationship (still the immaturity, but God used even that this time).  At the very end of my time at Eastern I started to go back to church, but again in a non-denominational church for a year before I finally came home to the Catholic Church. I was dating a different girl at the time, but began to hear this little tug of a call towards the priesthood. It was something I had thought about when I was way back in the 2nd grade, but never thought about again. Instead I had focused on the idea of getting married and having a family. This time the Lord wouldn’t let me go. The more time I spent in prayer, the more clearly I heard the call. I needed to break up with her in order to more clearly discern my vocation. 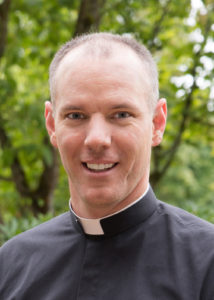 I entered the seminary at Mt. Angel in Oregon in 2002 to study philosophy for two years before the Archdiocese asked me to head to Mundelein Seminary just outside Chicago to study Theology. I was ordained in 2010 as a priest for the Archdiocese of Seattle and was sent to Tacoma for my first assignment in a cluster of 6 parishes where Fr. Tuan Nguyen was pastor. Many of you probably remember him from his time here at St. Brendan as an associate to the Pastor. Half way through my first year in the cluster they asked me to take on Visitation Parish and School by myself as the Priest Administrator. I was named pastor 3 years later and was the pastor there for a year before they asked me to take on being the Pastor at Holy Rosary Parish and School in Tacoma in addition to Visitation. I was there serving as Pastor for two years before coming to you here at St. Brendan.

Just some little things. I enjoy playing volleyball, I now play doubles volleyball in the sand; snowboarding; backpacking; reading; spending time with my family and friends; board games; card games; food! And much more!

That is a little bit about me. As I said earlier, I look forward to getting to know you and am already enjoying that process.
I know that I am not Fr. Jim Northrop but I bring my own gifts, which God has given to me and I will use them to serve you in the best way I can.

In the peace of Christ,